MYRTLE BEACH SAILING SCHOOL is an American Sailing Association affiliate and offers year-round sailing certification instruction for individuals or couple/friends. All of our ASA courses are live-aboard programs which allow you to experience the enjoyment of living the complete "sailing lifestyle".

Established in 2013, Myrtle Beach Sailing School is located in Little River, SC, just north of Myrtle Beach, allowing you to not only learn to sail in an ever-changing ocean environment, but also preparing you for coastal cruising by giving you the added benefit of learning the "rules of the road" while traveling the Intracoastal Waterway.

Our Instructors are USCG Licensed, love teaching, and are passionate about sailing.

Jason was born and has lived in Myrtle Beach for most of life, enjoying the multiple water-related activities that the area has to offer. After graduating from college in Atlanta, getting married, and starting a career in graphic & web design, Jason and his wife, Amy, decided to leave the “rat race”, get back by the ocean, and return to the Myrtle Beach area.

Jason’s passion for sailing began years ago when his family purchased a 44′ CSY for cruising and chartering the local waters during the summer. Having learned the basics of sailing while crewing, Jason quickly fell in love with it and set his sights on getting properly trained and certified through the American Sailing Association, first as a student, then a few years later as a sailing Instructor. As part-time Captain of his family’s charter business, he decided sailing is what he wanted to do for his career, closed his web design business and began focusing on sailing full-time.

While chartering and teaching basic sailing skills to those interested, Jason decided to open Myrtle Beach Sailing School in 2013 and began non-certification instruction on Island Song, a 32′ Morgan 321. In 2014 he decided a more formal, progressive learning curriculum would be beneficial to his students and opted to become an American Sailing Association Certification Facility.

Jason now spends most of his working time on the Atlantic teaching others the lifetime enjoyment of sailing, and delivering sailboats up and down the East Coast or to the Caribbean. In his spare time he can be found with his wife and two sons either sailing, fishing, playing at the beach, or participating in some other outdoor activity. 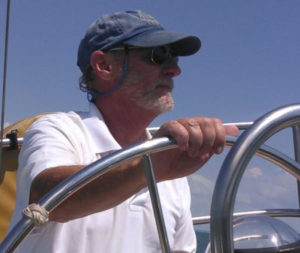 Bill grew up around the water and on boats in southwest Florida and started sailing dinghies solo in open water at age 11. He chose a college, among other important reasons, for its location on the shores of Tampa Bay and for its strong sailing program. In graduate school, he hitchhiked on racing and cruising boats in Marblehead, MA on the summer weekends.

With decades of experience in sailing the Great Lakes, the Gulf of Mexico, the Chesapeake Bay, and the Atlantic Ocean under both sail and power, Bill has also skippered racing campaigns on the Chesapeake Bay, the Atlantic Ocean, and the St. Johns River in Florida; both around the buoys and offshore. Bill was elected Fleet Captain of the Columbia Sailing Association and spent two seasons setting CBYRA sanctioned races in the North Bay, and has 14 years as Captain of large ocean going passenger vessels both in Florida and in South Carolina. He holds his USCG Merchant Mariner’s License and his STCW95 Certification.

Bill brings many years of university teaching experience with decades of sail experience and ASA Instructor Certification to Myrtle Beach Sailing School, and is always happiest sharing his knowledge and love of the sea and of sailing.

In his free time Bill still enjoys cruising the Atlantic coast while restoring his Cal 28-2. 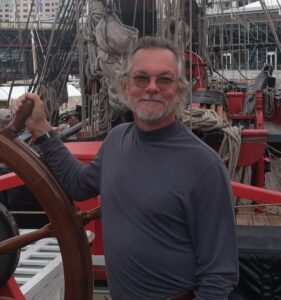 Sam has always loved the water, growing up in Kentucky along the Ohio River. At fourteen he attended camp where sailing was offered and completed his first sailing classes sailing dinghies and olympic style craft. Sam went on to study in Lexington, KY at the University of Kentucky and became interested in whitewater sports. He paddled whitewater around the globe with his principal achievement, co-leading the first successful expedition down the Yangtze River in China.

With a daughter in tow, Sam and his wife Karen decided to look into sailing as a family activity. They began with ASA instruction in Traverse City, MI with a local ASA facility there. Sam became active in a local Kentucky Sailing Club, Cave Run Sailing and while Commodore led the development of CRSA to develop their own school that continues to this day. During the early 2000’s Sam, Karen and Rachel sailed on chartered craft in the Caribbean, British Columbia, Brazil, Florida, Greece, Scotland, California, and Spain. During these events Sam would often take students for a genuine ASA 104 class where the students would do a bulk of the planning in addition to enjoying exotic destinations.

In 2016, Sam and Karen retired from corporate life to join a friend on the World ARC, a circumnavigation of the globe beginning and ending in St. Lucia. They completed that cruise in May of 2018. Upon returning to the US in 2018 they boarded their Sabre 402 “Muse 10” and began an extensive refit in Pensacola, Fl. They sailed the boat around Fl and found a new home in Hilton Head SC.

Sam loves sailing, the water and active sports. He feels like he’s been blessed and is excited to share his passion for sailing with those who are new to the sport and are eager to see what’s beyond the horizon.

Any cookies that may not be particularly necessary for the website to function and is used specifically to collect user personal data via analytics, ads, other embedded contents are termed as non-necessary cookies. It is mandatory to procure user consent prior to running these cookies on your website.

SAVE & ACCEPT
Keep Me Updated!